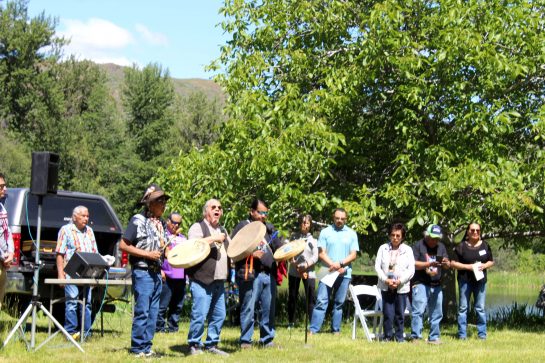 Photo by Don Nelson Representatives of the Confederated Tribes of the Colville Reservation were joined by the Methow Conservancy and community members to celebrate the transfer of ownership of the Wagner Ranch. 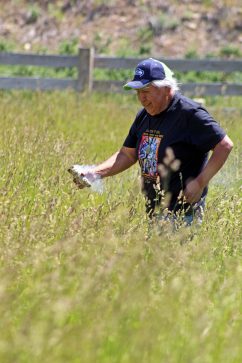 Photo by Don Nelson Methow The descendant of Ernie Brooks blessed the Wagner Ranch property with sage as part of land transfer ceremonies.

The land was home to the Methow ancestors

The smell of burning sage carried on the breeze Friday afternoon (June 24) as Methow’s descendant Ernie Brooks blessed the land of Wagner Ranch, where dozens of people gathered to celebrate the return of 328 acres of land to the indigenous people who have since time immemorial called it home.

The land at Wagner Ranch, which has been renamed x̌ʷnámx̌ʷnam, or Hummingbird, was purchased by the Methow Conservancy last fall. On May 19, the Conservancy signed a deed transferring ownership of the land to the Confederate Tribes of the Colville Reservation, 12 bands including Methow’s descendants. Just over a month later, Methow’s descendants and Confederated Tribes welcomed members of the Conservancy and the community in a ceremony officially acknowledging the transfer.

Located just north of Winthrop and east of the Chewuch River, Hummingbird’s land features open fields, river access and several buildings, offering a promising future for conservation and cultural gatherings. At Friday’s meeting, attendees watched the ceremony from white Adirondack chairs set up beside a lush pond with yellow irises and rose bushes.

The ceremony opened with a traditional prayer and song, followed by remarks from Winthrop Mayor Sally Ranzau and members of the Confederate Tribes and conservation. After the presentation of the gifts and the blessing of the earth, the guests shared a salmon pastry lunch.

Sarah Brooks, executive director of the Methow Conservancy, said the land return movement has been a gradual process, with small portions of land being returned over time. Bringing Hummingbird back to the Confederate Tribes is by far the organization’s most meaningful project to date, but that kind of partnership has taken time.

“We haven’t always had our eyes open to the potential for land restitution and partnership,” Brooks said. “And several years ago, in our strategic planning process, we recognized that we were probably missing something important in our role.”

The Confederate Tribes originally approached the Conservancy six years ago seeking land acquisition expertise, hoping to secure Hummingbird. Before a purchase could be made, the property was purchased by the Western Rivers Conservancy, a non-profit land trust. When it came back on the market last June, the Methow Conservancy jumped at the chance to buy it.

After a conversation with Methow’s descendants, the Methow Conservancy launched a huge fundraising effort, raising $3.6 million in about three months, Brooks said.

“We took a really deep breath,” Brooks said. “We have never raised so much money in such a short time.”

Brooks said that before opening the campaign to public donations, the Conservancy reached out to specific members of the community with whom it had built relationships over time. A crucial part of fundraising was inviting these donors onto the property to tell the story of the land.

“Everyone really resonated with the idea that we would be giving land back,” Brooks said. “That was the driving factor for the money we raised.”

Brooks said it was important for the Methow Conservancy to provide the gift without any restrictions, such as a conservation easement or land use parameters. Nevertheless, the people of Methow have managed the lands of the Methow Valley for generations. Back in the care of Methow’s descendants, Brooks said the property was rich with conservation opportunities.

Not only is the land home to many native plants, but it also sits along 1.6 contiguous miles of relatively untouched river, making it a promising site for salmon spawning and fish habitat restoration. The hills that cross Eastside Chewuch Road also serve as a wildlife corridor.

The hummingbird will be kept under the direction of Methow’s descendants through Confederate Tribes ownership, according to a May 19 joint press release. Joseph said that as custodians of the land, the Confederate Tribes intend to protect it as much as possible.

Before being displaced by colonizers, the people of Methow lived off the land, harvesting medicines and foods like bitter roots, sarvis berries and salmon, Joseph said. He hopes that a return to the land will bring with it a renewed ability to gather these traditional foods and medicines, thereby improving the health of members of the tribal community.

“This place is probably the closest thing to heaven at the time, because it provided everything our people needed,” Joseph said. “The cure comes back to how we lived before.”

But land and water are important beyond the resources they provide. Joseph said they also have strong cultural significance. He hopes this new site can serve as a meeting place for retreats, youth cultural camps and traditional gatherings like winter dances, baptism ceremonies and first harvest ceremonies.

These cultural opportunities will be especially important for young Methow people who may never have attended ceremonies or had a place like Hummingbird to do personal and spiritual reflection, Joseph said.

Joseph said he thought of the earth as a spinning top; as it slows down, it begins to wobble.

“The world is teetering now, and to get it back in sync, our younger generation is going to have to learn more about… their spiritual upbringing and really care about land and water,” he said.

Friday’s homecoming ceremony was an opportunity for community members from all walks of life to express their heartfelt gratitude. Brooks said she is grateful for the patience that the descendants of the Confederated Tribes and Methow have given the Methow Conservancy through such a learning process.

“To me, it’s such a gift,” he said. “It touches our hearts so much, it’s truly priceless.”

Brooks said Methow Conservancy is open to future partnerships. In her remarks at the ceremony, she admitted it was strange to be thanked by Confederate Tribes for what she thought was just doing the right thing. And yet, in this case, “you’re welcome” seemed the perfect answer.