Tribesmen from Anaipallam and neighboring villages have lived in the area for many years, deprived of basic amenities and access to nearby towns is a daily struggle for them.

“It’s what we wanted…always…and this road almost feels like a ‘dream come true’ moment but we think it doesn’t serve the purpose.” The sense of disappointment reflected in the voices of the tribesmen at Anaipallam was evident despite the realization of the dream of their first road, a basic convenience, to the tribal hamlet.

A road linking Pillur Mattam and Anaipallam was a longtime request from the tribes after an incident in 2019 when nine tribesmen were struck by lightning and needed emergency medical help. Although police and Forest Department officials arrived at the scene, it took 17 hours for an ambulance to arrive and rescue the injured as there was no suitable road. After three years, the residents of Anaipallam have the road connection, but many feel that it is too narrow and, in the absence of public transport, of little use.

Anaipallam, an Irula tribal village with 65 families, is located eight kilometers from Pillur Mattam in Coonoor taluk of Nilgiris in Tamil Nadu. TNM spoke with tribesmen from the Anaipallam area and activists in the area to understand why people are not entirely happy with the new road.

The tribal people here have lived in this area for hundreds of years, deprived of basic amenities and facing many difficulties in accessing nearby towns. As it takes more than 10 hours to travel from their homes and back to their hamlets, many wanted to leave their ancestral villages.

The Irula tribes in these villages earn their living through pepper, coffee and jackfruit cultivation and honey hunting. To market the minor forest products, they have to wander through the forest, which has the presence of Indian gaurs, sloth bears, elephants and tigers. With no adequate road infrastructure, in the event of a medical emergency, getting to hospitals in time is a herculean task here. People in need of medical attention, including pregnant women, are transported in improvised cloth stretchers and some have died en route.

Ambulance transporting patients on the unpaved road in 2019

After the 2019 incident, Nilgiris collector Innocent Divya inspected the village and initiated the construction of the road between Pillur Mattam and Anaipallam. The project costing Rs 6 crore was completed after three years. Residents of Chinnala Kombai now want the district administration to extend this road link for another 3 km to connect their hamlet. They also want the administration to widen the width of the road so that mini-buses can be operated.

“Our elders would come and go to town to sell ragi and millets by carrying them on their heads. Forty years ago, they deployed donkeys to transport building materials for houses. We cannot imagine this scenario now. Unpaved roads are good up to 4km from the Pillur Mattam on non-rainy days.Trucks used to stop on the unpaved road and we had to carry the load on our shoulders to reach the trucks.The new road would reduce the drudgery “But our children still have to stay in the boarding schools and the villagers won’t be able to return quickly because there are no buses on this road. What’s the point of having a useless road?” asks a resident of Anaipallam.

The road, according to some locals, will be useless because it is narrow and can only be used by cars and two-wheelers. “It could help tourists who want to explore the Nilgiris. No minibus can travel on this route. People who have money can rent cars. But for the tribal populations, it is expensive”, explains the inhabitant.

Residents of the tribal villages hike well for hours, but be wary of the stretch’s tea and coffee plantations, which are not maintained properly. “Wild animals have made these areas their home and we are risking our lives to walk this stretch. In 2021, Mari Chellan, a tribesman returning home, was trampled to death by a wild elephant,” says- 2. Incidents of human wildlife conflict are high in the stretch and after dusk motorists also do not accept journeys home despite the road.

“About 500 people live in this area. The road only connects Pillur Mattam to Anaipallam. The villages of Chinnala Kombai, Keezh Kurangumedu, Melkurangumedu and Mallikorai are located within a radius of three kilometers. other tribal villages by this road. That’s the only downside to the road. I work in the Pillur Mattam area and now it only takes 20 minutes to reach my house on two wheels. I am really happy that the administration has finally put the cemented road to our settlement,” said one of the local residents, who works in a government service. 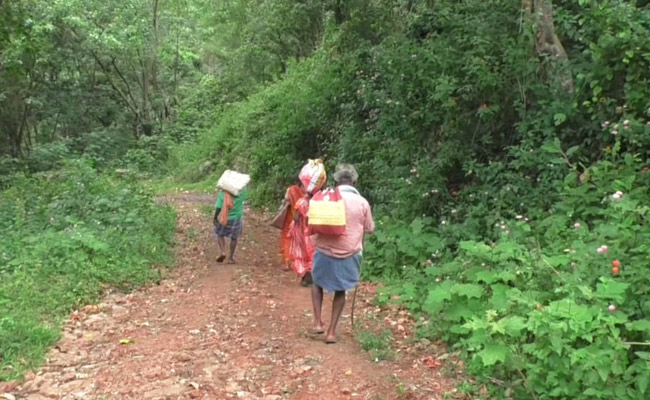 A risky walk through the forest

JR Mani, a tribal activist based in Coonoor, said a road is the only essential service that brings government officials to tribal hamlets. “In Nilgiris, roads bring shops, electricity, water and schools closer to the tribal hamlets at fair prices. If there is no road, then there is nothing. More than 20 Tribal hamlets still need roads. Some villages have road links but no bus service. The administration told us that bus services are impossible citing the reason that the roads are narrow and have more curves. Formerly , the tribal village of Sengal Kombai had 60 families, but now there are only 15. All left their ancestral hamlets because the villages are located in remote areas with hilly terrain and access to modern needs like schools and health services is almost impossible,” says JR Mani.

The tribesmen have communal land at Kaval Kombai near Kallar, where they grow millet and other crops, but have to trek inside the dense forest to reach the place. Given the difficult situation, many tribal families stopped farming and eventually migrated to nearby towns in search of employment, Mani says. Besides school and employment, development in inaccessible areas is out of the question. Even building a house in tribal hamlets involves a lot of struggle as there are no roads to transport building materials. “The administration should consider possibilities of providing basic amenities to tribal hamlets,” Mani says.